To provide Cal Poly students, faculty, staff and the public with a unique interdisciplinary environment in which to foster the Learn by Doing philosophy by providing educational experiences on a working ranch, supporting diversified agriculture and forest resources while maintaining the integrity of ranch operations.

To provide Cal Poly students, faculty, staff and the public with a unique interdisciplinary environment in which to foster the Learn by Doing philosophy by providing educational experiences on a working ranch, supporting diversified agriculture and forest resources while maintaining the integrity of ranch operations.

Most of the Indian activity of the Central California Ohlone Tribe took place in the canyon or valley to the north, Waddell Creek, which runs east and west and has a greater beach area. Some evidence such as shell piles and grinding stones, show that the Scott Creek area was visited also.

On November 2, 1843, Ramon Rodriguez and Francisco Alviso were granted "a square league of land", more or less, by Manuel Micheltorena, Mexican Governor of California. It was described as running from Arroyo Puerca to the Canada de Las Trancas on south and north, to the Sierra on the east, and the Pacific Ocean on the west. On March 1, 1867, President Andrew Johnson issued a patent confirming the ownership. The grant was named Rancho Agua Puerca Y Las Trancas. With all the beautiful Spanish language to chose from, it literally means Hog Water and the Bars. Agua Puerca probably refers to the stagnant water in the stream which comes out at Davenport Landing, the original southerly boundary; and Las Trancas refers to placing poles for a gate or barrier in a narrow canyon just south of Waddell Creek. An interesting sidelight is that in the translation of the description to English, the transcriber recognized the word Sierra and left that as the northeasterly boundary instead of using "mountain ridge". Some smart lawyer could have laid claim to a strip through Modesto.

The land passed through several ownership and ended up in the hands of James Archibald, who farmed it. He arranged for a Swiss dairyman, Ambrogio Gianone, to run the dairy. Mr. Gianone built the cheese house (in 1867) and had some shipwrecked ship's carpenters build the barn (in the late 1880's) at the south end of the valley, which stands today. (Approximately one-third of the westerly end of the barn blew off in a severe storm.) Later Mr. Gianone bought the north third of the rancho, where Swanton Road crosses back over the ridge. It is known locally as Gianone Hill, and there are two families with fourth generation children living there today.

Mr. Archibald complicated matters by dying in Scotland in 1875. By the time the dust settled from a two-year lawsuit, Mrs. Archibald sold out to Joseph Bloom, who lined up water rights and farmed the valley. Homestead land was also available and settlers moved right up to the Mexican Land Grant line, which replaced the Sierra designation. (The line is still visible on aerial photos of the area today. Many of these families are still here. One homesteader was the Staub Family, great grandparents of Bud and Lud McCrary of Big Creek Lumber.

The Beginnings of Swanton

Fred Swanton, who built the Boardwalk and was an early mayor of Santa Cruz, was an early enthusiast of hydro-electric power. He built a powerhouse on Big Creek, dams on Mill Creek and Big Creek, and several miles of flume. The plant produced electricity from 1899 to 1948. In that year a forest fire burned the flume, and it was abandoned. It was the first plant of the Central Coast Counties Gas and Electric Company, which is now part of PG&E. With all this activity plus the logging, the area needed a post office. The natives liked Laurel Grove, the name of the inn and the livery stable, and petitioned the Postal Service, but Fred Swanton knew the U.S. Senator. The Swanton Post Office was closed in the late '30's.

The Ocean Shore Railroad was organized to run along the coast between San Francisco and Santa Cruz. Construction was started from both ends, with the north ending at Tunitas Creek, about halfway between Half Moon Bay and Pescadero. The south line was built as far as Swanton. When the S.P. (Southern Pacific) built a parallel line to Davenport, the cement plant business dried up. The San Vicente Lumber Company logged from 1905 to 1923 in the hills behind Swanton and had the Ocean Shore Railroad haul the logs to their mill in Santa Cruz. Much of the redwood was used to rebuild San Francisco after the 1906 earthquake and fire. A daily passenger train ran between Santa Cruz and San Francisco, with the 127 missing miles covered by a Stanley Steamer bus.

The Ocean Shore was also into real estate development, and in 1907 a town called Folger was laid out and approved by the County in the area around the big barn. Apparently the coffee business was on hard times too, because none of the 324 25 by 100 foot lots sold. So, we still grow Brussels sprouts on the corner of Railroad Avenue and Fir Street. In 1922 employees of the Ocean Shore Railroad struck for higher pay, and that was the end of the railroad. For several years the University of California (Berkeley), College of Engineering, ran summer school here. Students would come by train and lay out roads and survey land for a summer semester. There are many stories told about cold water, poison oak and snakes, although there are only a few graduates left. (The building by the Red House was built by the engineering students.)

Starting in the 1920's it was discovered that artichokes and Brussels sprouts grew well in the coastal area. Scott Creek was dammed and huge single cylinder gasoline engines were used to pump the water onto the upper terraces. There are the remnants of some twenty reservoirs and numerous gravity flow structures left on what is now rangeland. Some of the leading citizens of Santa Cruz spent their childhood here on windswept little farms with such nicknames as "Siberia" or "Poverty Flats". Some berries were also grown at this time.

In 1938 the Poletti and Morelli Families became the owners. World War II caused most of the tenant farmers to leave, and the ranch was divided into three phases. There was a Grade B dairy, a beef cattle operation, and row crops. Artichokes and Brussels sprouts being labor-intensive, a labor camp was established with mostly Filipino workers. John and Bob Musitelli took over the beef cattle at this time and, with a bulldozer and herbicide and fire, opened a lot of waste brush land. They had a cow-calf operation and used a jeep pickup with bale of hay very effectively as a saddle horse. The Grade B dairy left and the Musitelli's expanded their operation.

With the use of chicken manure and excellent water supply, the ranch produced excellent crops of sprouts year after year.

When I bought the ranch in 1978, I left the current tenants in place. I tried a small cow-calf operation on the Little Creek side, enough to realize it was a lot different from prunes and apricots. Then the Musitelli's retired and I hired a cowboy to run the cattle. We ran stockers at first and then went cow-calf, at the wrong time.

My vegetable tenant left. Believing there must be something else in Davenport's world than Brussels sprouts, I leased the land to flower grower, who grew cut flowers and market peas. Although he tried hard, worked hard, and was conscientious to a fault, he could not make it.

My cowboy got a better opportunity and left. A good friend in the Cal Poly administration and I had been talking, so we worked out a deal for a three-year lease. We are now on the five-year extension of that lease, and I am very satisfied, and I hope they are also. I am a graduate of Cal Poly, and one of the phases I liked best was the opportunity for "hands-on" experience. Although the 178 mile distance is an obstacle, the Swanton Pacific Ranch offers a real opportunity for those who want or need the experience. It is also good for class demonstrations.

My first piece of land in this ranch is 412 acres of second-growth forest, which I bought in 1943. This past summer we logged about 65 acres of it very selectively. The interest of forestry students and faculty has been inspiring. This is almost the closest commercial forest to San Luis Obispo.

I know I have wandered from a straight history of the Swanton Pacific Ranch. It got its name because, somehow, many of my tools were stamped S.P. The brand I selected was the lazy SP. It is by the Pacific, and it is in Swanton. Swanton is an uncrowded, beautiful place. My goal in putting this acreage together is to preserve it as such and to share it now and in the future with people who will appreciate it and profit from the experience. Thanks for listening!

How You Can Help 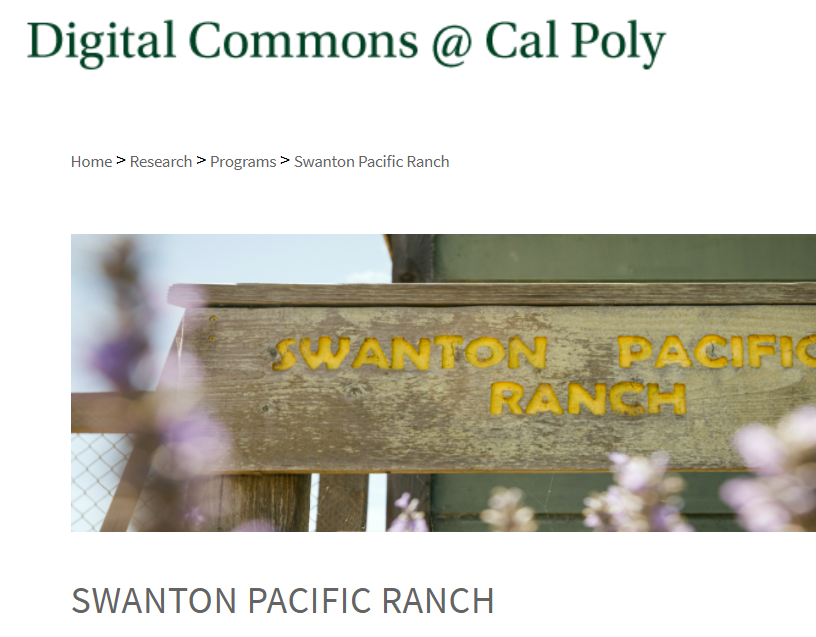 For a link to the many resources held by Cal Poly's library on Digital Commons, click here.